And we’re not talking “Chiller” Fest. 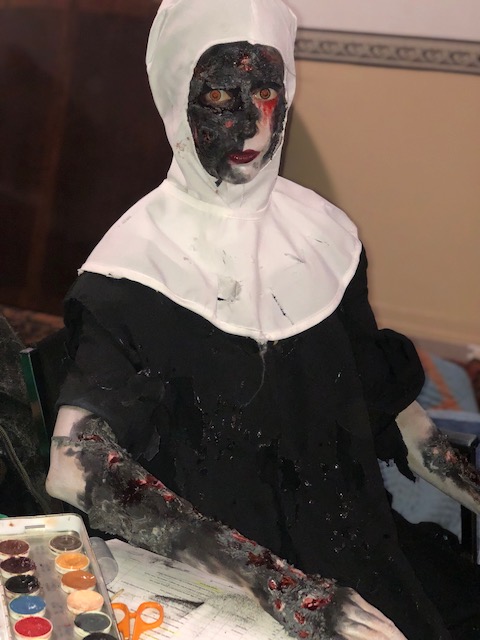 We spent last weekend in a spooky church basement shooting scenes of terror and mayhem, mixed in with blood and also nurnies and charcoal powder–in other words, it was a horror fan’s dream. This was days five and six of shooting for our new feature film Demon Nun. 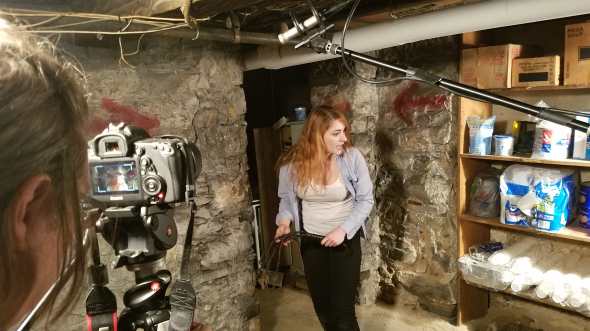 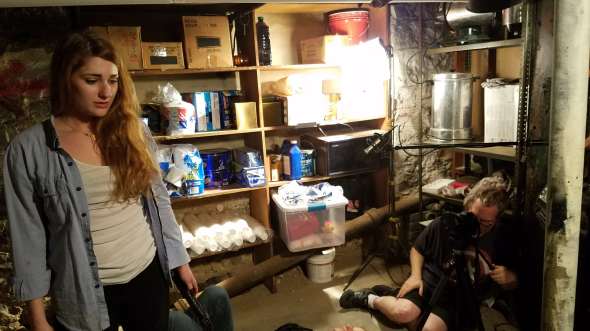 Knife vs. whip…who will prevail? 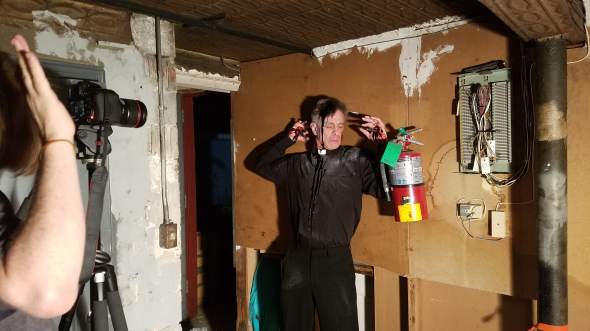 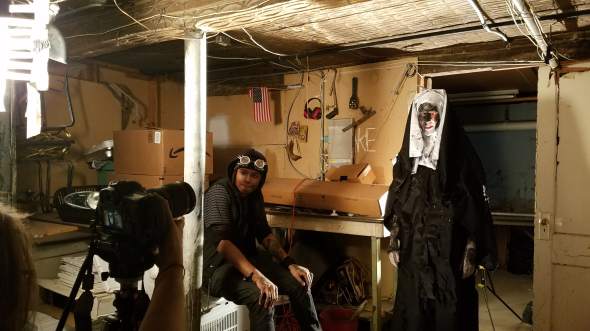 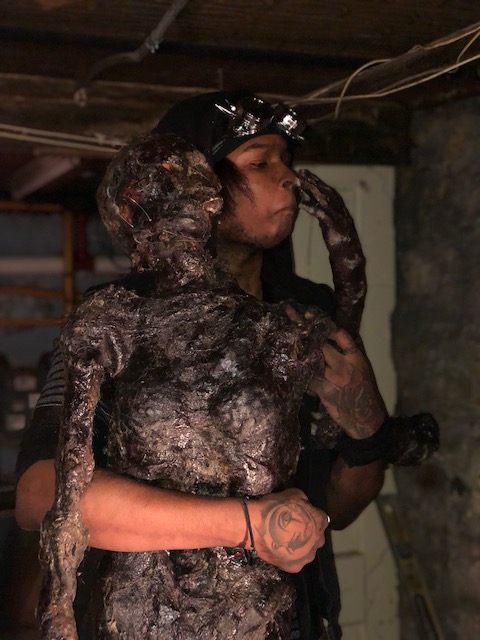 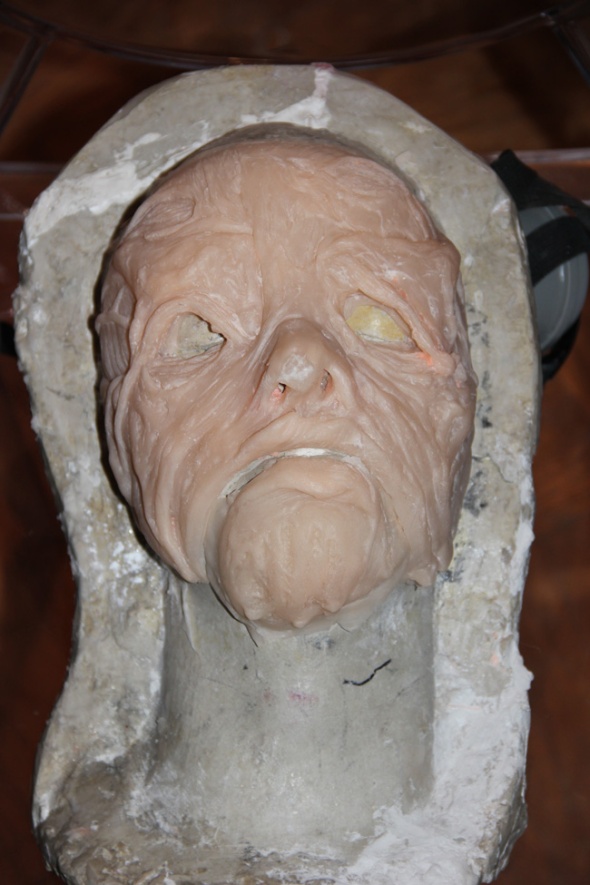 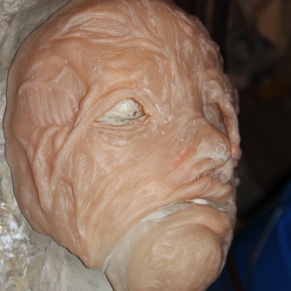 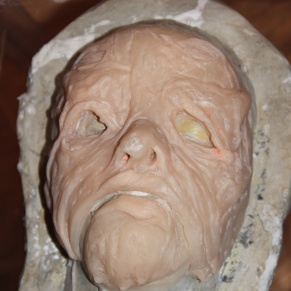 Above is an encapsulated silicone prosthetic we made of a melting, burning face. Amazing how squishy it is with the addition of Smooth-On’s “Slacker” product. It’s extremely flexible. Slacker is the way to go for facial prosthetics if you ask me.

Below are some clay sculpts of gross pustules, blisters and sores we are working on for another scene with a drug addict. Can’t wait to cast these in silicone, paint ’em, add syringes and glue ’em to our actor Matthew’s arms… 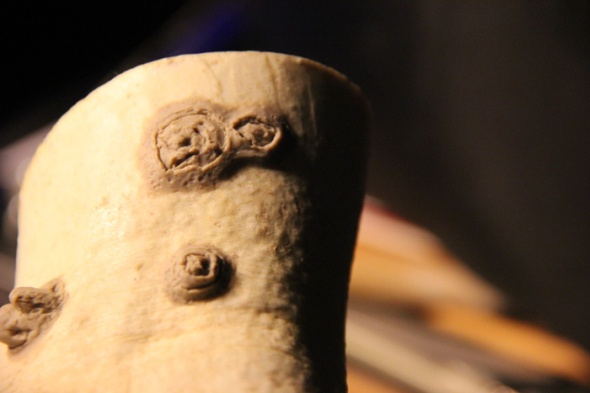 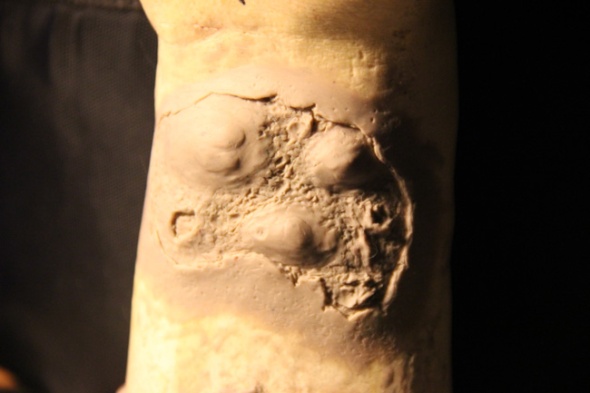 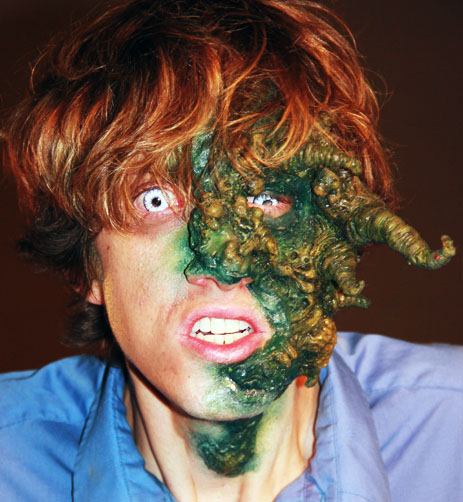 Now that our horror feature film Lifeform is about to be released, I thought it would be cool to show some of the many horror special effects makeups we created for it. (Too many if you ask my wife!)

We figured we’d have at least two creatures in the film–one is the main creature played by Virginia Logan and the other is the son of the villain, who is played by Adam Cerny. For him, we thought we’d have some crazy face mutation as well as a mutated monster hand. In this piece, we’ll show some of the steps involved in creating the face prothetic.

Here’s a shot of the face sculpture, you can see where we tried to work some tentacles in. Everyone knows tentacles are what’s best in life, after laying wasted to your enemies, listening to the lamentations of their girlfriends, etc. etc. 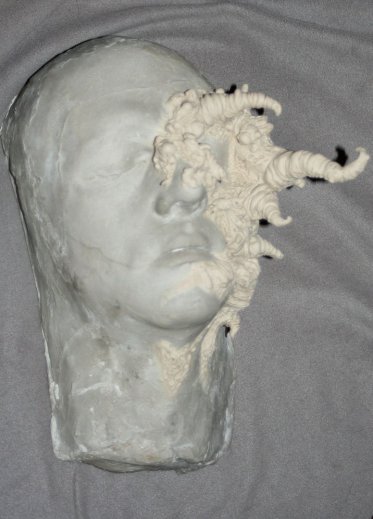 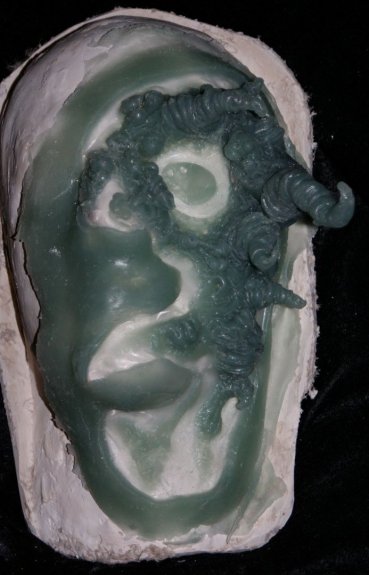 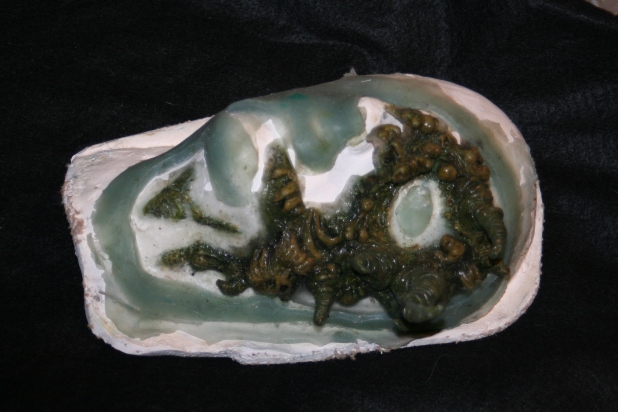 After sculpting it, I had Anthony Jones cast it in Rebound from Smooth-On and make the mother mold for it.  Then he casted the piece in silicone, also from Smooth-On. Don’t remember which one. He did a great job. All the details were perfectly transferred to the piece.

After that, Christine painted it with silicone paint. She’s an artist, so of course she did a smashing job of bringing out the fine details (and she has not coerced my admiration for her work in any way!)

Here it is on Adam. He did a great job of acting out the part of a mutant freak! Though he really doesn’t look that happy, in fact he looks a little annoyed. The things you have to do for showbiz… 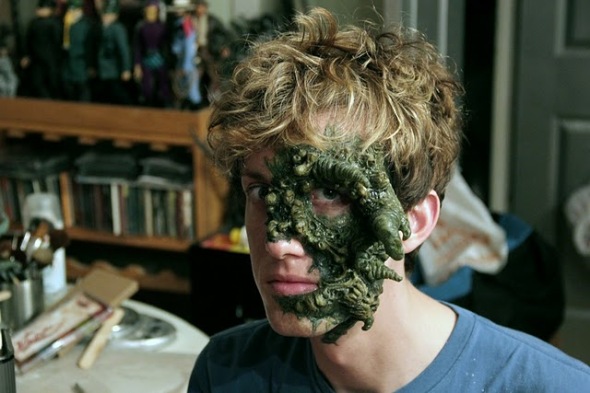 The top shot is from the film set…looks pretty awesome especially with creature contacts. He gets to strangle people with his mutant tentacle hand too, a pretty standard horror movie convention, but still delicious!

We’re in the midst of creating 3D animations for our film Lifeform. The software we chose was Blender–a free and open-source 3D computer graphics software product used for creating visual effects. Here at our studio we’re doing the animation, lighting and compositing. Modeling and rigging were handled by talented Blender vets Kevin Hayes and Nathan Taylor, respectively. At last count there were forty–odd (and we do mean odd) 3D fx shots in the film, which, while it doesn’t sound like a lot, is a HUGE amount of work, not to mention render time. Currently we’re averaging a day-and-a-half to two days of render time per shot, so you can imagine how long it’s taking to wade through the list. Still, it’s worth it when you see the results…   One of the more interesting facts is that you actually output the animation as a series of still images, .pngs, which you then import into Aftereffects, in order to create an entire animation, who’d have figured that? When we designed the actual creature, I was looking to invest attributes from actual creatures in nature, in order to give it a more authentic feel. Some dinosaur plating here, some praying mantis there, a scorpion tail over here… Now we’re trying to emulate some of the physical movements these creatures make in the real world to bring the illusion home.

One tip I would give to any fledgling animators: don’t forget to use the animation curves to smooth out the model’s movements. You can use the bezier tools to make them less “roller-coaster” like–some of mine were looking like the Cyclone at Coney Island before I smoothed them out!

The goal is to finish all the 3D shots in the next few months and then on to color correcting and sound mix! Ugh…

Presented for your edification: a partially completed tentacle attack scene featuring Virginia Logan suddenly sprouting mutant monster tentacles from out of her back and attacking Peter Alexandrou–and who can blame her really? It was a long day on set, afterall. Everyone was cranky!

Actually, we’ve been using Blender to create 3D animated tentacles for these shots. Then we bring them into AfterEffects and combine them with a matte created in Mocha (sounds like we’re making boozy drinks here!) and, voila: instant monster tentacles! Actually, it’s not that instantaneous, but it’s very gratifying to see one’s vision of tentacular (is that a real word?) homicide come to life before one’s eyes.

We combined the computer tentacles with some practical ones on set. For these, we actually had to do reverse shots, which involved wrapping the silicone prop tentacle (made from Smooth-On’s Dragon Skin silicone product) around the actor’s wrists or ankles, greasing them up with KY (who says sets are no fun?) and pulling them off while filming. Then in Final Cut Pro, we reversed these shots so they looked like the tentacles were wrapping around his limbs. I was pleased with how seemless these shots turned out.

What do you think?

Below, you can see a 3D Blender model that was created for our new film by Kevin Hays, of the Colorado Hays. Kevin took a few concept sketches that I threw at him and came up with this great design. We really appreciate all the hard work and effort that went into its creation.  We’ll be adding the creature to the film shortly, after we have it rigged, then animated, lit and composited…whew! Can’t wait to see this thing wrecking havoc onscreen. 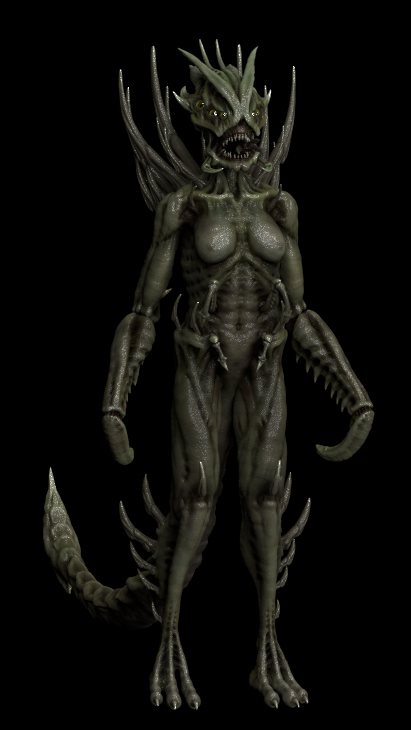 Here are some other views of the creature. We decided to go with Blender after Andrew Bellware convinced us about it. It’s free to download! 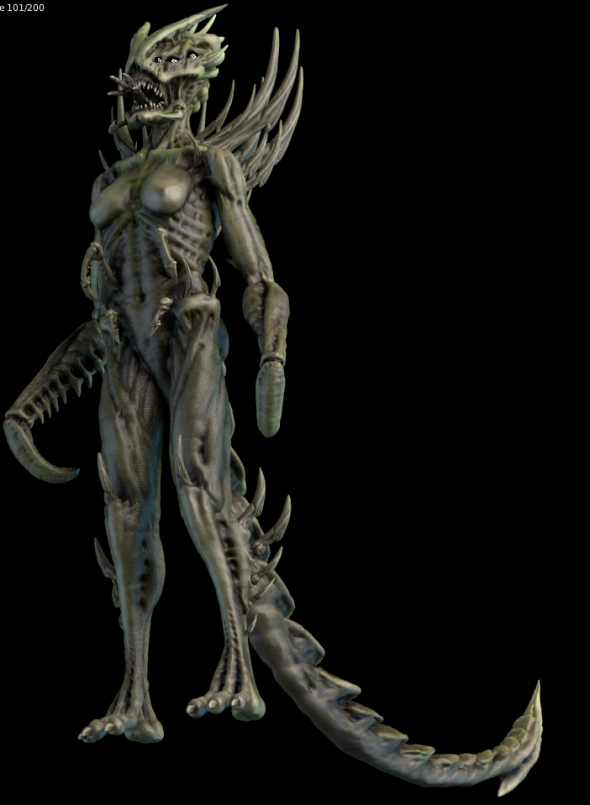 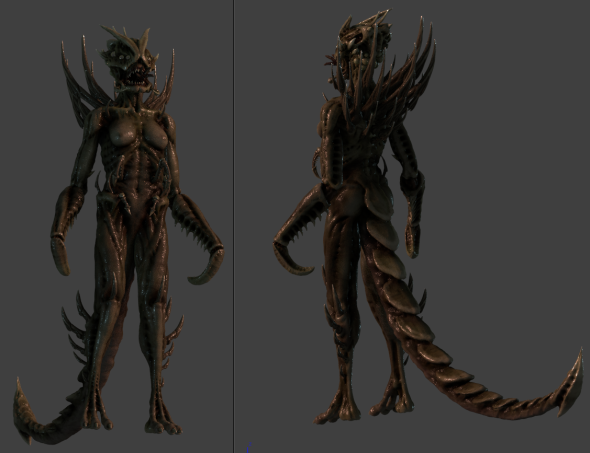 Additionally, here are some of the sketches I gave to Kevin… 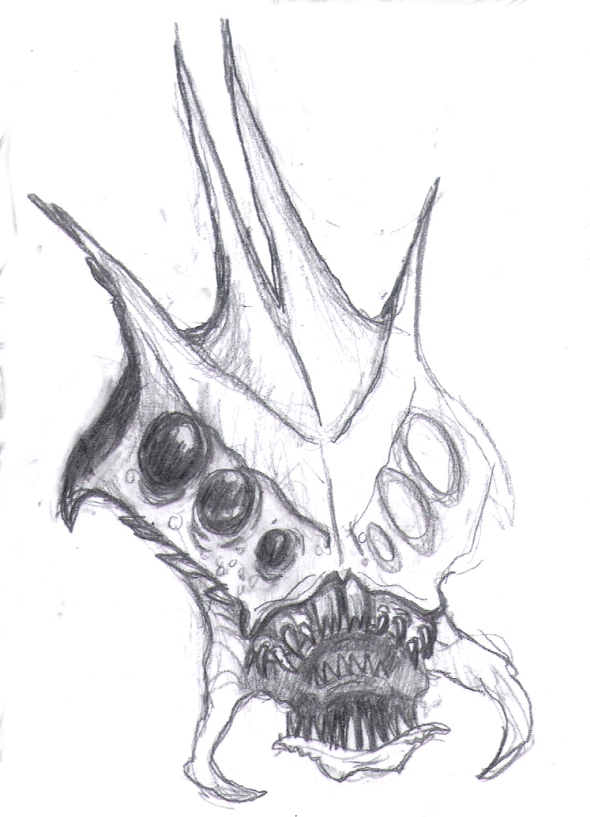 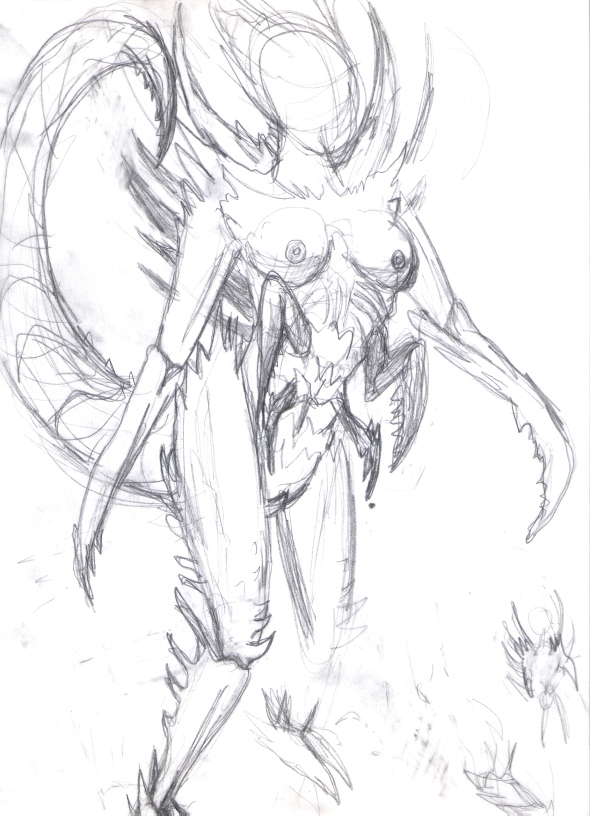 Kevin’s model will really accentuate all the practical effects we did in the film and take it up a few hundred notches or so. Many thanks Kev!

Babes And Blood on Long Island…!

Not. Safe. For Work–I warned you.

Okay, so in-between actually editing our film “Lifeform,” we’ve been putting together two shoots, for additional scenes. Now, the reason for this, I could say, is to add an additional layer of narrative in order to make the film more complex and add more dramatic depth, but the truth is, I just wanted to add more crazy, blood-curdling monster-lovin’ mayhem! Also more beautiful women. Hey, Shakespeare wrote for the groundlings folks, don’t kid yourselves. There’s more stabbings in his work than the average episode of CSI. You know you love it…I just deliver the goods, okay? So, no mea culpas coming from this part of the neighborhood.  But I digress…

Yes, in order to add a denser layer of narrative complexity, we went ahead and sculpted a scalping wound for our aforementioned beautiful actresses’ to wear. You can see a few shots of the piece after it was created and we were in the process of  adding hair to the gelatin piece–oh yeah, I cast it out of gelatin, the same stuff Bill Cosby used to sell on TV. The great thing about this stuff is that it’s cheap, it looks good on camera and you can re-melt it in your microwave to use it again. We all had Jello Puddin’ Pops after the shoot! 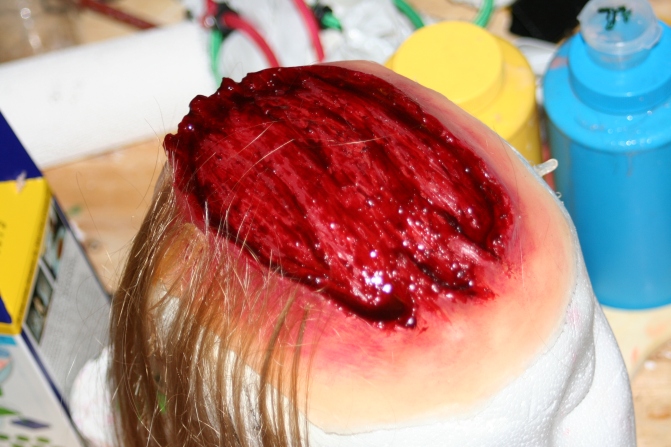 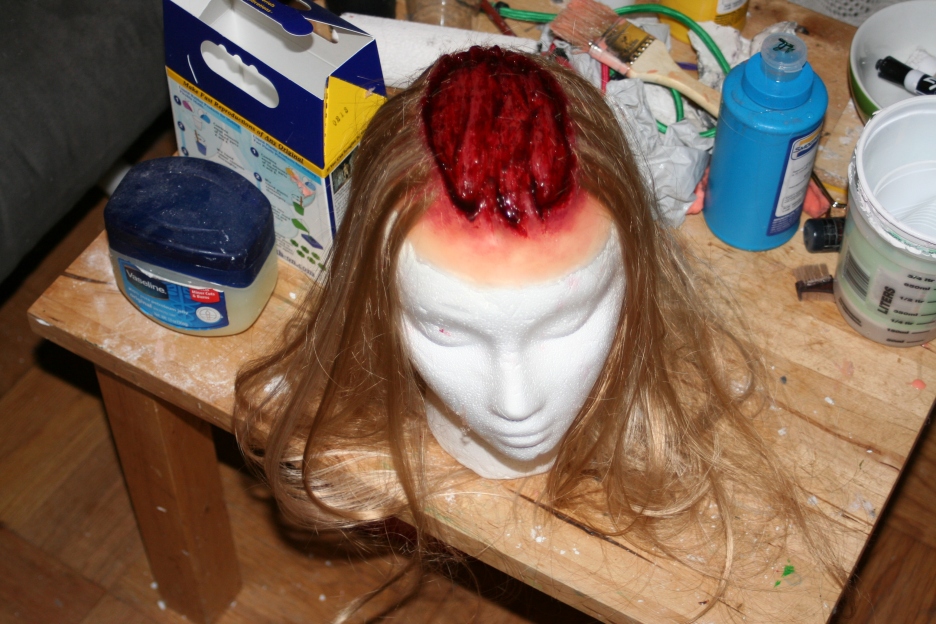 Here’s the effect on the very talented Tatyana Kot–she’s the new screen queen on the block. Our shadowy beast tracks her down and for some reason feels the need to rip her dress off and then pull her scalp off. Hey, it happened in Macbeth didn’t it? Or was it The Merchant of Venice, I can’t remember… All kidding aside, the scene worked like a charm. Tatyana was a consummate professional and Miranda Kahn, who played the creature did a great job. Both are wonderful actresses! The end effect is absolutely chilli 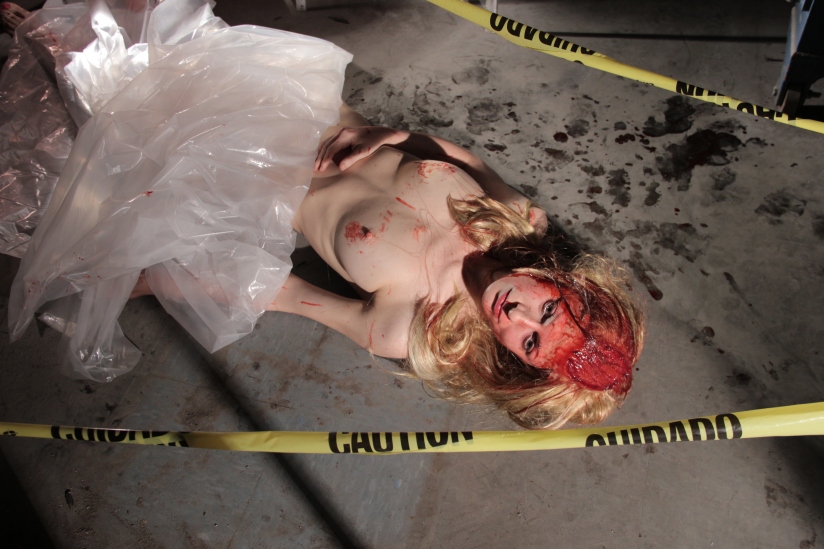 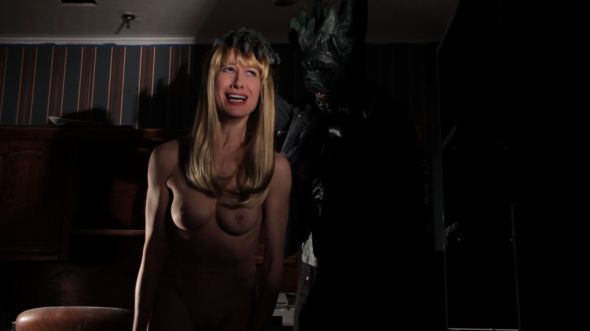 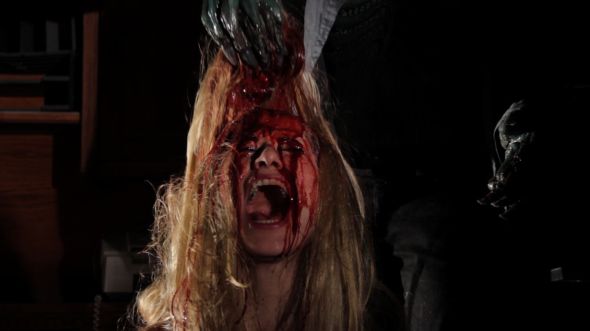 The next weekend, we shot more mayhem, this time with Tatyana and Jacklyn Sokol in an earlier portion of the scene, as drunken debutantes on their way home, before the assault. Both women were great and…Jackie got to wear a similar headpiece as well–the beast apparently hates blondes. Who can blame it? Thanks to makeup artist Meraly Lopez and Christine Russo for painting and applying the pieces. Also, thanks to Josh Barbour, for helping me crew the shoot! 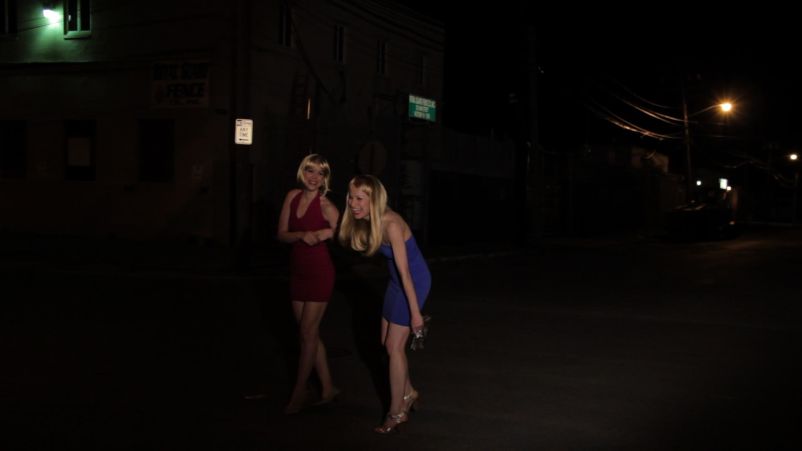 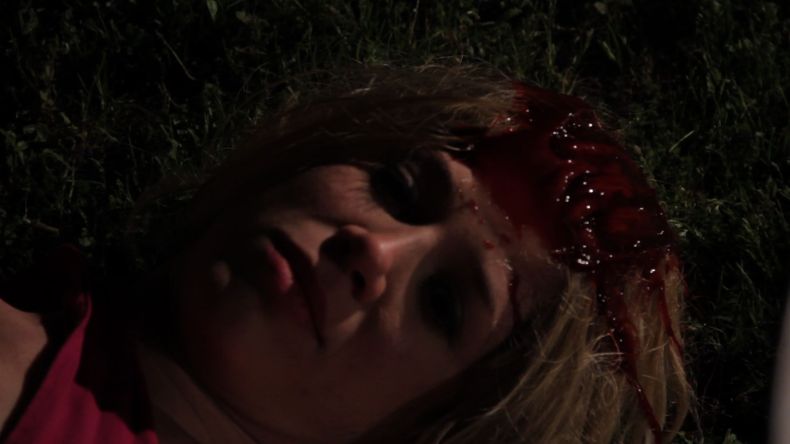 We also shot scream queen Christina Wood and Tom Rowen’s sequence. They play a pair of lovers caught in the beast’s crosshairs–just like in Hamlet when…aw forget it… 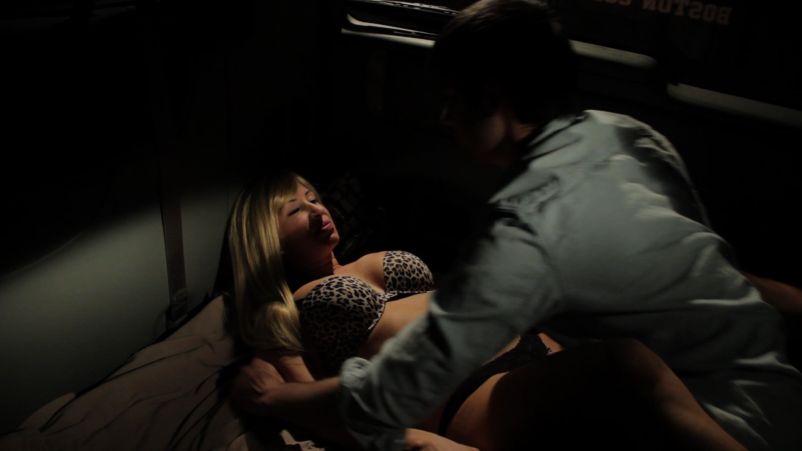 IN THE WERKS
Blog at WordPress.com.