Recently we had the opportunity to create a monster suit for our newest production, Lifeform. The actual application was the culmination of many months of work. First, we started out with some pre-production drawings like the one attached here.

You can see in the illustration that the creature’s head is actually pretty beastial and less humanoid than the final product–due to the fact that we had to fit it to the actresses’ actual face–oh well…!

After deciding on a general look, we broke the design down in our brains–how were we going to end up building this thing and getting it on the actress? We decided to go with a multi-appliance approach–crafting numerous pieces out of silicone or latex and gluing them right on her. There were gloves with claws cast from resin, there were arm pieces that would attach to the top of her arms, there would be a chest piece, a head piece and finally, upper and lower face pieces. 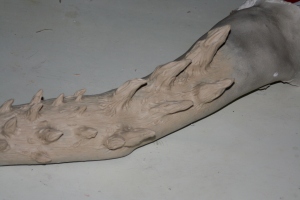 First, I sculpted each and every piece from plasticene, using body casts we had taken of an actress, as the base on which to sculpt them. This took a little while, since there were numerous pieces that were going to be required, but it turned out to be worth it when we saw the final product.

We had Anthony Jones, a very experienced mold maker, cast them in Ultracal plaster.(I still don’t know where I’m gonna put these monster molds. They’re doubling as a coffee table and a futon in my tiny apartment!)

Then he slip molded the pieces, creating a top layer of latex by pouring mask making latex #80 in the molds, gradually building up several layers. Once that was done, he  created an inner layer of foam to give the pieces shape and definition. He did a great job as you can see below.

After that, Christine painted them, doing a boffo job as usual!  She used PAX paint on the latex pieces and FuseFX and Psycho paint, Sil-Pig brand pigments on the silicone pieces. She really brought them to life by painted on a dark base and lighter-colored highlights, as you can see in these pictures.

Finally, the day of truth–shoot day. If anyone really believes making movies is a glamorous past-time, let me shatter your misconception for you. We had to bring the actress in SIX HOURS early, so that Christine and Ciara Rose Griffin, another talented makeup artist, could put it all together and turn the very talented Virginia Logan into a hideous creature.

They painstakingly glued everything to her with Skin-tite and Prosaide, skillfully blending all the pieces together as they went along. It was a torturous process for Virginia to undergo, but she held up like the complete trooper she is!

Finally, here she is, along with FX contacts and monster teeth, wrecking mayhem on the set!

We’ll probably add some CG enhancements to make her even more horrible, twitching tentacles, that sort of thing.

See the gallery below for more pictures of the whole process…

This past Sunday we pulled a crazy twelve hour shoot wherein we tortured cast and crew not only with numerous takes, but also mucho monster makeup.

You can see some pics here of the great work that a team of people pulled off the other night. The scenes all involve our heroine struggling to come to grips with her shapechanging, her identity and also why the heck she was on-set until 5 am. I sculpted the face and spikes, along with Christine who also  painted them. The very talented Meraly Lopez applied them. Virginia Logan brought the makeup to life! It was a fantastic time and the makeup looked great.

We want to bring as much high-level prosthetic work to the film as possible. More pictures of our great cast, including Peter Alexandrou and Kate Britton, to follow!